Kinshasa: Executive Secretary Flory Okandju at the Ministry of Transport 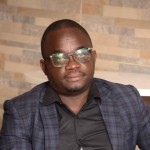 At around 5:00 p.m. Kinshasa Time at the government hotel, the executive secretary was received by the Minister of State for Transport and Communication, Chérubin Okende, who was himself returning from a meeting of the Council of Ministers.

At the end of the meeting with the supervising minister, Maître Flory addressed the press in these words;

Following my appointment as head of the AFTTCC by the board of directors made up of members from 5 countries making up the agency, we deemed it useful to return home to present our civilities to the supervising minister, the minister of transport and listen to his advice.

We need advices from authorities, the government and the republic in order to properly carry out our mandate. Because the mandate that we carry is that of the republic.

What could be more normal for us to come to the Democratic Republic of Congo and take ample guidance from the authorities of the country.